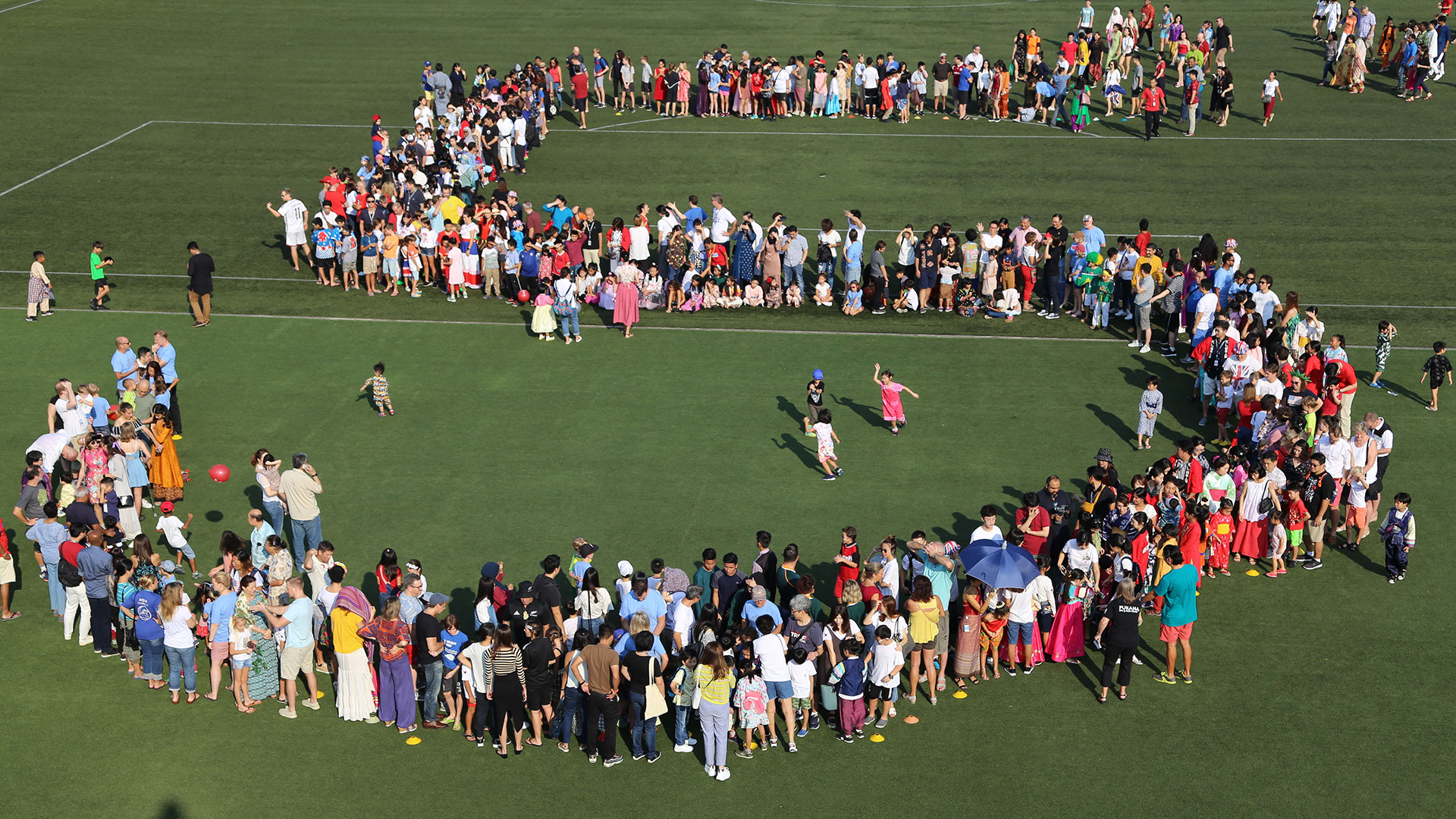 Our 5th International Day began with a gathering on the Sports Field for a giant number 5 photoshoot that featured all of the IGBIS community. This was followed by a lion dance, silat performers and Bhangra dancers to welcome the IGBIS community to our biggest International Day on Saturday, 16 March. Dameer Khan and Stephanie Pei Yi, our student MCs for the event, greeted us in several languages and invited Mrs Anne Fowles, Mr Chua Seng Yong, Mr Mohamed Tawfik Ismail and Mr Lister Hannah, representing our Board of Governors and our Management Board, on stage for their opening addresses.

Our school has grown to a community of 42 nationalities, and 28 of those countries were represented in this year’s event. Parents, students, staff and friends collaborated to present artifacts, tasty treats, and activities that showcased those countries. There were jumping castles, bubble games, and sports activities, as well as numerous vendors selling arts, crafts and unique gifts, such as live caricatures. Back in the Sports Hall, the stage was filled with music, dance, martial arts and other performances throughout the morning, including a flash mob dance choreographed by our Indian parents, which was so successful that an encore performance saw many more people join in.

Booths and dancing were not the only ways in which the community came together. Collaboration could be seen in the small details, such as the flower centrepieces. Grade 2 decorated paper bag “vases”, Kindergarten made cards, parents bought the flowers and donated card holders, and administrative staff assembled the centrepieces.

The event ended with a video made by founding student, Mathilda Khoo, celebrating the family that IGBIS has become over the past 5 years. The Ensemble and the Choir performed an adaptation of Coldplay’s Viva la Vida, with lyrics reflecting the school and our vision. Celebrations continued all weekend at different locations throughout the city.

Around 1000 people attended the event and everyone took home photostrips and a little door gift to remember the day. More importantly, they took home the memory of an enjoyable event where we celebrated our diversity and achievements from the past 5 years.

This message is only visible to admins.

Error: Error validating access token: The session has been invalidated because the user changed their password or Facebook has changed the session for security reasons.
Type: OAuthException
Solution: See here for how to solve this error

For the fourth time within our school’s six years of operation, we have had the privilege of hosting the annual 24 Hour Race Kuala Lumpur. Over 1000 students are at school, either running a relay endurance race for a period of 24 hours or volunteering in the event management. We are extremely proud of them and all their efforts.

Share on FacebookShare on TwitterShare on Linked InShare by Email

Stunning work by an IBCP student @IGBIS. It is amazing to see what is possible when students are able to follow their passion. #IGBIgnites #IGBCP #IBCP Please check out the link: https://drive.google.com/file/d/1_J1Yq9DEP9feSYsJSg2UfpRelPJ1HJb1/view?usp=sharing

School is Closed Due to Haze

The Ministry of Education has advised that schools in Selangor will close on Thursday and Friday (September 19th and 20th). IGBIS will close for students on both days and also affecting any event(s) happening. I.e. Read more…

IGB International School is proud to be the host of the IB Regional Workshops, Malaysia from 14th to 16th September 2019.